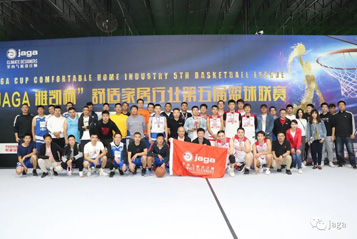 After nine weeks of round group robin and the elimination match, on the afternoon of October 25th, "JAGA Cup" Comfortable Home Appliance Industry 5th Basketball League Game has finally come to the end game. HM & Ptocean team and Toshiba AC team were on the final list to fight for the champion of the game.

At the beginning of the finals, the Toshiba AC team had great cooperation, high morale, and strong attacks. Meanwhile, HM & Ptocean team was also showing their steady pace of winning many scores. Players from both sides made it such a seesaw battle that exciting rebounds, beautiful long shots, and tight defence has brought players non-stop standing ovation.

In the last 17 seconds, the game has entered the most intensive phase. As both sides of the team were doing their best, finally Toshiba AC team won the game with the score of 43:41 by accelerating the gaming pace. Respectively, HM&Ptocean team has won the 2nd place and Lianfeng team has won the third place, while the Zebra team, Viessmann team and Bosch Heat team won the"Happy Basketball team" awards. In a nod to NBA tradition, Comfortable Home Appliance Basketball League also awarded The Most Valuable Player (MVP) to Xu Kang, who is from HM& Ptocean team.

In the evening, JAGA, the sponsor of this game, has held a dinner party as a gesture of gratitude. People get together in the name of basketball and will write new chapters in the spirit of ingenuity and cooperation. We all feel the responsibility of showing humanistic care through the home appliance and developing innovative products. We strive for each own on the field, but we are all brothers off the field, which makes every hug worth cherishing.

Just as JAGA has been adhering to the value of " Be Willing to Take Risks And Not Afraid of Failure" for more than half a century, we will always be inspired and encouraged along with the wonderful basketball games we had!