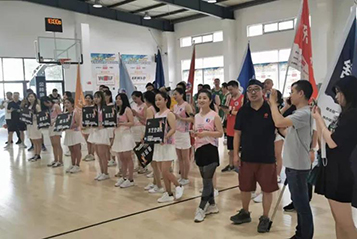 This is another enthusiastic summer of sports!

European Cup is going to its peak and new heroes will be revealed. The 32nd Olympic is approaching, while the sports warriors from all over the world will compete in Tokyo.

On July 10th, the Shanghai “Comfortable Home Appliance Industry 6th Basketball League Game” was also kicked off as scheduled. JAGA, who has been actively supporting and participating in this activity over the years, also forged its own basketball team for the first time this year- "JAGA 雅凯 Team" entered this basketball league with all its honors!

At the same time, "JAGA 雅凯 Team" is one of the co-organizers of the games. At the opening ceremony, Tian Bo, the Technical Director of JAGA (Shanghai), wished the league a great success on behalf of JAGA. He introduced "JAGA 雅凯 Team", a brand-new young team with lots of potential and strength.

开幕式燃情现场| The opening ceremony was with lots of enthusiasm.

After the opening ceremony, with the referee's whistle and the beautiful arc of the first serve, the opening game was a fierce match between last year's champions Toshiba team and the newly-joined Vaillant team. As a newcomer, the Vaillant team was with their athletic movements and sharp pitches, but unfortunately got defeated by two-time-wining champion Toshiba by 34:56.

In the second game, the Zebra team and Mantz team brought about a close match. The two sides fought hard as Mantz team was explosive at the court. However, the Zebra team, as one of the strongest teams in the previous games, has carried out its strength and courage more and more until winning the game by 62-40.

斑马队与曼茨队赛后合影| Zabra team and Mantz team posed for a photo after the match.

Yesterday's final appearance was the Panasonic team and the HM & Ptocean team. HM & Ptocean team, as the last league runner-up team, their capability shouldn’t be underestimated. Since the beginning of the game, they proactively took the lead on the court with vigorous movements and perfect shooting precision. Eventually, they ensured their victory by 51:22.

Meanwhile, the "Cheerleaders Fun Shooting" and "HVAC Kids Fun Game" activities have also carried out lots of fun, energy, and cuteness. The"Basketball Babes" and "Basketball Babies" showed their vitality and lovability, which has become a beautiful and unique scenery on the court.

Next,according to the competition rules, seven teams representing eight different brandsof Shanghai comfortable home appliance industry will first take the groupsingle round robin to reveal the top 4, and then compete for the top 3. Thewhole competition process will last about two months.

As a grand event for comfortable home appliance industry in Shanghai, this basketball league has been held for the six time this year. It has been supported and participated by more than 100 enterprises and nearly 1,000 employees in the industry, while also watched and by hundreds of thousands of basketball fans. It boosts the external influence of Shanghai comfortable home appliance industry, condenses the team's unity and ability, and carries out the promotion of healthy competition among friends in the industry.

Basketball, the bridge of communication.